Voices of the Foreign Legion 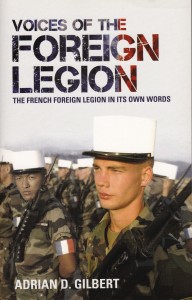 The French Foreign Legion has a reputation as the most formidable of military institutions.Established as a means of absorbing foreign troublemakers, the units spearheaded the French conquest of North Africa in the 19th-century. Accepting volunteers from all parts of the world, the Legion acquired an aura of mystery – and a less than enviable reputation for brutality within its ranks.

Voices of the Foreign Legion looks at how the Legion selects its recruits, where they come from and why they seek a life of hardship and danger. It also analyses the organization’s robust attitude to discipline, questions why desertion is a perennial problem and assesses the the Legion’s many military achievements since its formation in 1831.

This is the real story of the Legion, featuring first-hand material from the men who have fought in its ranks. Its scope ranges from the creation of the colonies in North Africa and the Far East, through the horrors of the two world wars, to the epic but ultimately hopeless battles to maintain France’s imperial possessions. The story is brought up to date with accounts and anecdotes from those legionnaires who continue to fight for French interests around the globe.

“The regiment’s entire history, from the nineteenth century to modern times.” – The New York Review of Books

“These vibrant legionnaire voices are agonized, bitter, brutal, fearful, and haunting, but some speak with pride and praise (‘It’s a soldier’s dream’), recalling the legion as a life-changing experience.” – Publishers Weekly

Buy VOICES OF THE FOREIGN LEGION on Amazon