Challenge of Battle: The Real Story of the British Army in 1914 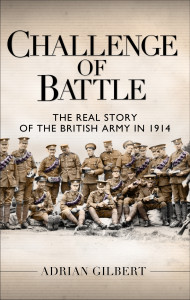 Winston Churchill described the opening campaign of the First World War as ‘a drama never surpassed’. The titanic clash of Europe’s armies in 1914 is one the great stories of 20th-century history, and one in which the British Expeditionary Force (BEF) would play a notable part.

Previous assessments of the BEF have held to an unshakeable belief in its exceptional performance during the battles of 1914. But closer examination of the historical record reveals a force possessing some key strengths yet undermined by other, significant failings.

Within an authoritative and well-paced campaign narrative, Challenge of Battle re-evaluates the Army’s leadership,organization and tactics. It describes the problems faced by commanders, grappling with the brutal realities of 20th-century warfare, and explains how the British infantry’s famed marksmanship has to be set against the inexperience and tactical shortcomings of the BEF as a whole. But it also demonstrates the progress made by the British during 1914, concluding with the successful defence of Ypres against superior enemy forces.

Making full use of diaries, letters and other contemporary accounts, Adrian Gilbert builds a compelling picture of what it was like to fight in the battles of Mons, Le Cateau, the Aisne and Ypres. In this thought-provoking new book, he clears away the layers of sentiment that have obscured a true historical understanding of the 1914 campaign to provide a full, unvarnished picture of the BEF at war.

“Adrian Gilbert has written a sophisticated and nuanced analysis of the British Expeditionary Force in 1914. Rooted in thorough archival research, Challenge of Battle tackles the ‘official history’ account of the BEF’s first engagements in the Great War in a scholarly and lucid manner. Of particular interest to academic historians will be Gilbert’s analysis of the strengths and weaknesses of commanders at different levels. The book deserves to have a significant impact on our understanding of the British fighting machine in 1914.”
Professor Richard S. Grayson, author of Belfast Boys: How Unionists and Nationalists Fought and Died Together in the First World War

“Gilbert’s measured, balanced analysis of the British Expeditionary Force’s performance in the first months of World War I presents the Old Contemptibles as they were.”
Dennis Showalter, author of Tannenberg: Clash of Empires, 1914

“Well-written and carefully argued, Challenge of Battle clearly describes the initial battles of WWI in graphic detail and begins what promises to be a major reappraisal of the British Army in 1914.”
Professor J. W. Thacker, Dept. of History, Western Kentucky University

“Through personal accounts and official documents alike, Gilbert’s book finally exposes the truth behind the tactics, personality clashes and power struggles that destroyed the BEF. This brilliantly balanced book is a story of both cowardice and incompetence, courage and survival.”
History of War

“Adrian Gilbert’s Challenge of Battle … brings together in a concentrated and more readable work than most to produce an analysis of all of the British fighting from Mons to the end of First Ypres. It is well researched, is objective and balanced. You cannot ask for more.”   Chris Baker, The Long, Long Trail

“There are many accounts of military events but Adrian Gilbert, who is a distinguished military historian, has contributed a detailed analysis of the performance of the British Army in 1914, covering both strengths and weaknesses. Gilbert’s book is well written and supported by his detailed research of letters and documents. There are clear maps and some contemporary photographs to illustrate what is an interesting work, both for military and non-military historians.”   The Historical Association

Buy CHALLENGE OF BATTLE on Amazon